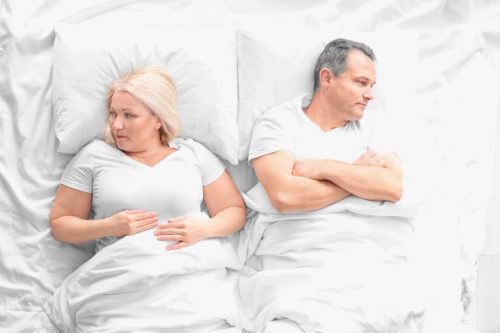 “I am almost fifty-five and my husband is fifty- six. We have been married twenty-seven years and most of it has been querulous with the exception of the first few years…

He suffers from untreated depression although most often it feels like I am the one suffering from his depression. This has been a bone of contention for decades. Our sex life was amazing in the beginning. Rollicking, joyously, never knew sex could be so wonderfully amazing. It was the glue that held us together. Whether arguing or at peace, sex returned us to each other. But, it was always just sex.

He doesn’t understand any other type of connection. So during sex I felt like the most important person in his world, immediately afterward I could have disappeared and that would have been fine for him. In fact, he began to leave the bedroom and go watch TV most nights after sex. So, around the time he turned fifty he met a woman fifteen years younger than I and fell head over heels for her.

I fully believe it was only an emotional affair, but it was deep. He cherished her in a way he never cherished me. He defended her against my anger. We stayed together through this time only because when things became heated she denied any interaction with him. I know he would have went to her if she had been willing. And, this is when he began to lose interest in sex.

For the past several years he has become more and more impotent. It has been months since we have had sex, and he shows no interest and has no confidence when we do attempt it. He has tried the prescriptions with not much improvement and has even gone to a specialist, but refused to have any type of surgery to try to improve the situation. Any discussion about the situation leads to arguments.

I am emotionally exhausted trying to fix this on my own. I am lonely even when he is home. He ignores the fact that I would still like to be a sexually active woman. My self esteem is almost nonexistent at this point. I hate that I am becoming bitter about this. I feel completely alone. I don’t know what advice I am looking for. I guess I am just wondering if anyone else has lived through this kind of thing. And how? I feel like years are passing me by and it is so frustrating. Thank you”

32 thoughts on “A Raw Glimpse into a Troubled Marriage”