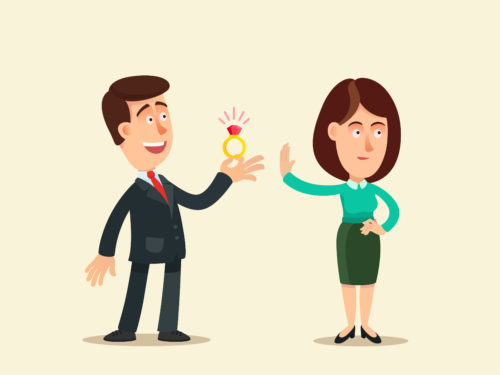 Anonymous writes, “I’ve been a single mom for over 20 years, I gladly devoted my energy in raising my two kids the best I could. For a few years, I provided home care to my grandma during nights and weekends after work…

Once my kids became adults and didn’t need me as much and my grandma passed away, I learned to enjoy my own company. I formed and joined different social groups, such as a cooking club, a dinner club, I joined dancing and art classes too. I loved my single life.

I work full time, I’m financially independent, I live frugally but enjoy yearly vacations and feel fulfilled. I accepted going out on a few dates, however, most men called me back just for “booty calls.” I don’t remember hinting I would be accepting of such “invitations.” I stopped dating, since the disrespect got too annoying too fast. I was at peace with the idea of growing old without a loving, decent and self-sufficient man.

Then he came, a sweet, caring, generous, hard-working widower wanting to share his life with me. He’s debt free, but only owns a car. He has a huge salary and is a world traveler, but there’s no retirement plan in place. He faces a few health challenges some as a result of not being diligent with his diabetes care, he’s making improvements.

We’ve dated for eight months. Long distance relationship. He wants to marry me and promises to let me manage his paycheck and to live frugally so he can build some retirement savings.

He’s in his early sixties, I just turned 50. I deeply care for him and appreciate his recent efforts to improve his overall health. As he recovers from several surgeries, I’ve had a taste of what my life would be if I marry him.

In a couple of weeks, he will move over a thousand miles to be closer to me, he sold his house, got rid of his long-time companion… his cat, and he found a better paying job in my city. He can work from home. He cannot assist in simple chores around the house due to his lack of mobility/dexterity, but he promises to hire a housekeeper to assist. At times I’m discouraged and hesitant to take charge of monitoring his health and finances to build a retirement account.

We are engaged. I don’t know what to do, sometimes I miss my independence and simple but active life, and other times I don’t want to let go of a potentially amazing husband who seems to love me tremendously. What am I not seeing? What else should I consider before I enter this marriage? Why am I so anxious?”